The Poster below really says it all.

It has been said that Polio is not an issue and therefore it is hard to excite people about finishing the job that Dr Salk started. Perhaps we all need to take a look at the success but also see that it is not true success until the job is done completely. 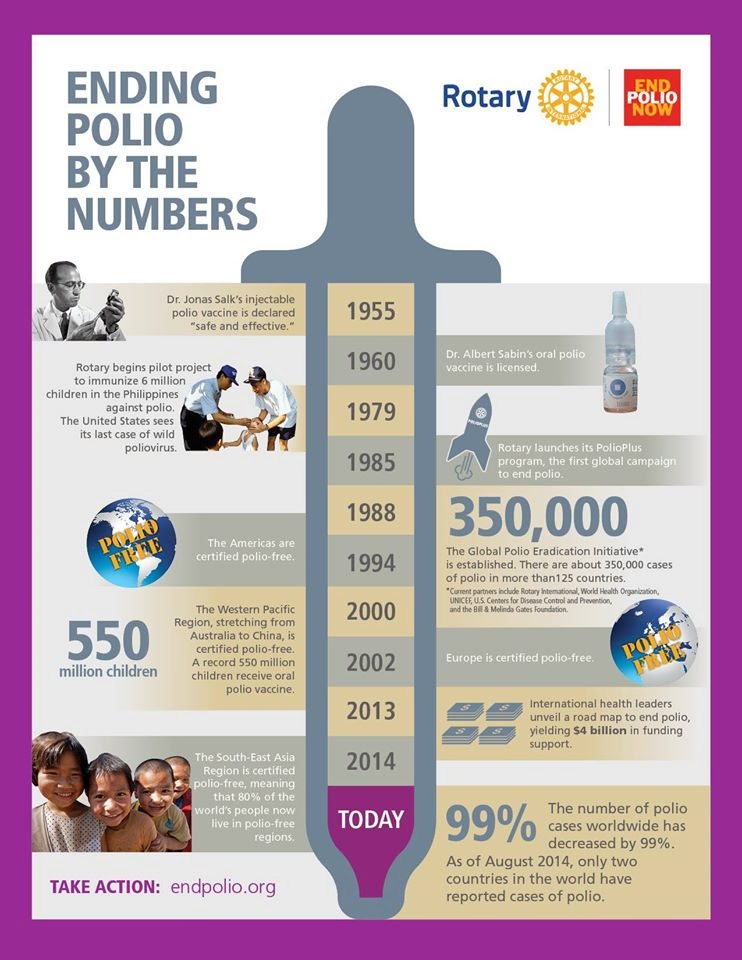 REMEMBER
One of the greatest scientific discoveries of the 20th century, Jonas Salk's polio vaccine, turned 60 yesterday. Trace the history of the fight to #endpolio from Salk’s polio vaccine to the world becoming 99% polio-free. Get involved: http://www.endpolio.org/ 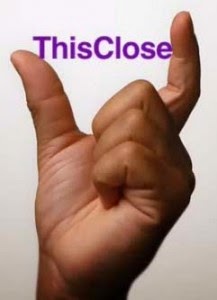 Have a look at this very important video on where Polio is today.

Only THREE countires left with Polio 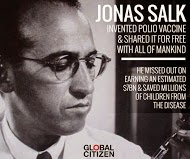 This is why we need to finish what he (Salk) started. A very good article to read on the matter.

Finish what he started

Lastly, a link to join in discussion with others from around the world on Polio matters...

No New Cases of Polio In Africa for 4 Months

A bit of very good news reported from the Global Polio Eradication Initiative. No new cases of Polio in Africa for 4 months now. We are indeed so close to eradicating this virus from our world. Let's not stop! 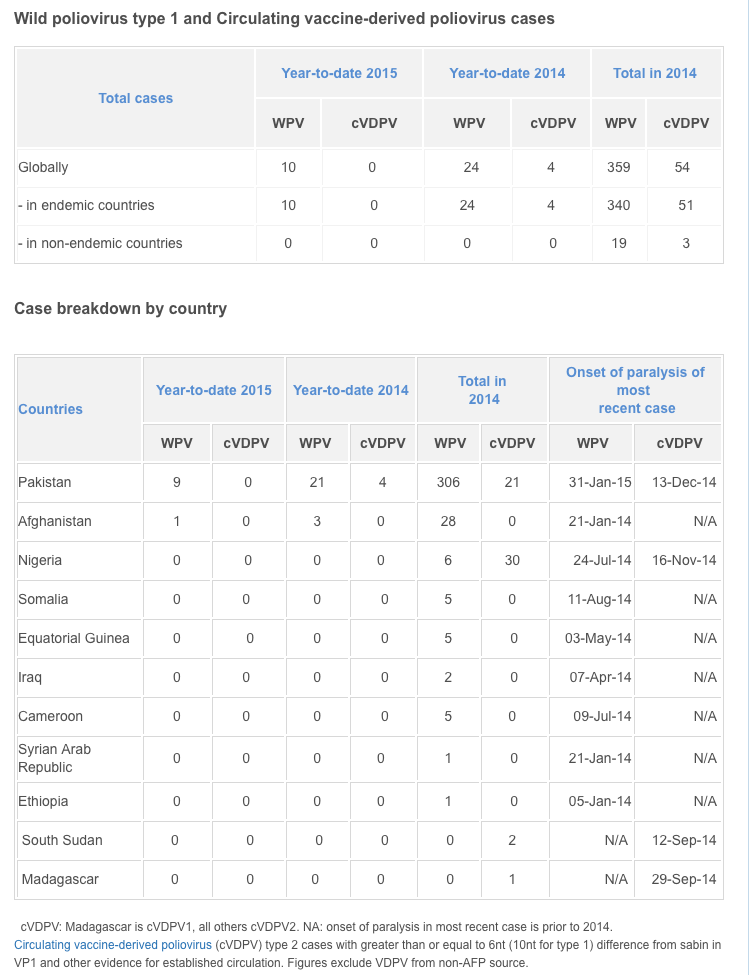 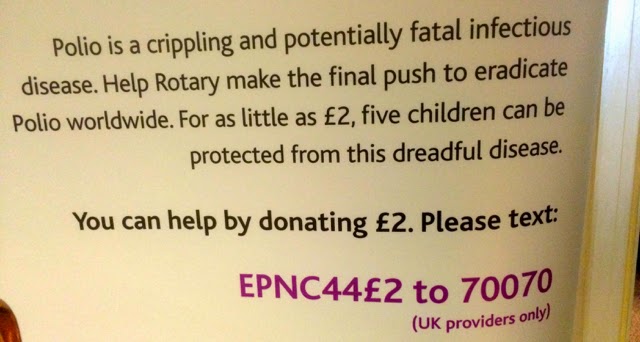 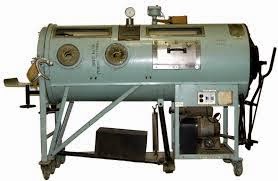 My second blog entry was intended to devote time explaining Polio from when it was first discovered in the 1800's. However like all best laid plans... I have had to adapt a little due to the fact of the most amazing article found in My Rotary. Please go to the link below this paragraph and read this most incredible story. Did you know there are still some people living in iron lungs to this day that were infected with the polio virus in the 1950" and one of them is a Rotarian. Read on!!!

This story is incredible and supports everything we are talking about - the fact that the general public do not know what is going on with Polio today or in the past and even Rotarians and Polio victims don't know. Hard to believe.

Also, something else to consider which is going on the blog as well is that there is now a measles problem in the USA this year. Last year 200+ people got it and now this year it is 400+ and growing. Why? Because parents don't get their child inoculated any more because they don't see the need. Whilst small pox may have been eradicated diseases like measles and tuberculosis are making a comeback because it takes several generations of total inoculation to eradicate. A point we need to drive home to everyone that we are so close and if we don't complete the mission and do follow-up we are going to see numbers grow just like with measles in the USA.

The Guardian - Unvaccinated Woman In Disneyland

It is interesting in the Forbes article that the author does mention Polio. She also points out that diseases such as Polio and measles are "just a plane ride away". So true. The Guardian article puts 2014 total of measles in the USA at a two-recade high of 644 cases in 2014. A trend we don't want to have with Polio.

WHAT IS AN IRON LUNG

When many think of Polio they think of the iron lung machine which is a big tank respirator. Doctors who were treating Polio victims in the acute stage saw many die because the disease simply paralysed all their muscles including those muscles that help us breath. The iron lung was used to help Polio victims at this acute stage breath and a good number survived the acute phase.
There was nothing available in the medical world to  keep people breathing until 1927, when Philip Drinker and Louis Agassiz Shaw at Harvard University devised a version of a tank respirator that could maintain respiration artificially until a person could breathe independently, usually after one or two weeks. The machine was powered by an electric motor with two vacuum cleaners. The pump changed the pressure inside a rectangular, airtight metal box, pulling air in and out of the lungs.
Inventor John Emerson had refined Drinker’s device and cut the cost nearly in half. Inside the tank respirator, the patient lay on a bed (sometimes called a “cookie tray”) that could slide in and out of the cylinder as needed. The side of the tank had portal windows so attendants could reach in and adjust limbs, sheets, or hot packs.
Not nice at all but it was the difference between life and death for many thousands of people. One machine would cost as much as a house in the 1950's and just take a look at how many are in the picture below. How much cost went into fighting Polio in the acute phase. We can't return to this ever again. 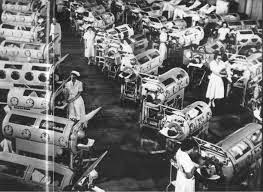 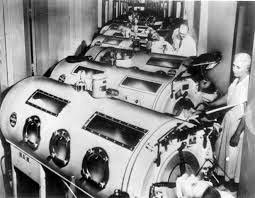 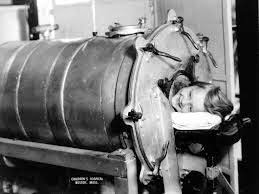 I hope this little bit of education from the My Rotary article to everything else on this blog entry helps you to understand what we need to do and to carry on the good fight. As always I would welcome your comments and help on Polio@60 / Celebration Through Education. Together we can beat this terrible disease.
Greg
Posted by Unknown at 07:04 No comments:

Welcome to this first of many, many blogs throughout the 60th anniversary year of Dr Salk's vaccine being declared safe and effective for use in the fight against Polio. This blog will explore the history of this debilitating disease and celebrate through education what has been done, is being done and will be done to eradicate it from the face of the earth. We will also look at the many organisations that have joined in the fight against Polio and in particular Rotary's response.

We will first start off with a simple but educationally worthwhile video that serves as a good introduction to Polio. Please feel free to share the video or this blog with anyone and everyone.

Remember that we have a few generations of young and middle age people around the world who don't even know what Polio is. As we are so close to eradicating Polio it would be a shame if apathy or even indeed ignorance of the facts ended up taking us two steps back instead of the two steps forward that is needed to wipe out Polio once and for all.

Now, on with the show! We hope you will learn something about Polio by watching this video.